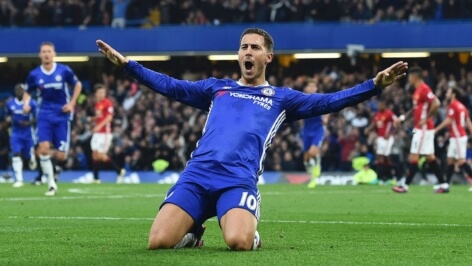 Seven years after signing with Chelsea from Lille, 28-year-old Eden Hazard has become one of the top players in the English Premier League. Taking the soccer world by storm with no signs of slowing down, the Belgian international has truly become a valuable asset to the Blues.

Here are four facts you didn’t know about Chelsea’s No. 10:

Hazard’s father, Thierry, played for La Louviere in the Belgian Second Division, while his mother, Carine, played in the Belgian Women’s First Division. Two of his three brothers are also professional soccer players: Thorgan and Kylian play for Borussia Monchengladbach and Chelsea, respectively.

At the age of four, Hazard began his career at his hometown club, Royal Stade Brainois. He spent eight years there before joining AFC Tubize.

A 17-year-old Hazard debuted as a substitute for the Belgian national team in 2008, becoming the eighth youngest international player in the country’s soccer history.

A New York Knicks fan, Hazard has been seen at live NBA matches. As far as his own basketball skills go, he has a “decent jump shot”.