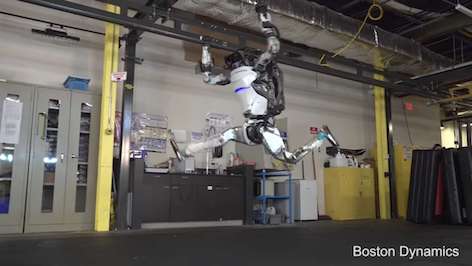 Atlas the Robot Goes from Parkour to 10-Point Gymnast

The famously nimble robot known as Atlas is making headlines again, and this time he’s going for gold with acrobatic feats that could earn him a spot on an Olympic gymnastics team.

Atlas previously caught the world’s attention two years ago as he struggled with placing a box on a shelf, deftly messing up the simple task and earning the empathy of office workers everywhere.

He made headlines in November last year, showing off some impressive parkour moves and doing a sweet back-flip.

In September 2019, Atlas is seen on video performing fluid movements – such as handstands, tucks and somersaults – with such natural grace that he could soon see Olympic glory.

Boston Dynamics first created Atlas in 2013, and he was originally intended to be an emergency search and rescue robot, performing actions in environments where humans could not survive.

Six years later, and Atlas continues to be a dynamic robot, and now the only question left is: what next? Maybe joining theAmerican gymnastics team?