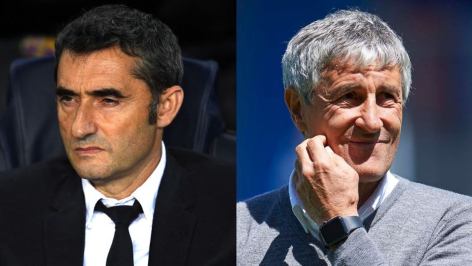 Barcelona: Setien In, Valverde Out

Veteran coach, Quique Setien, has been named as the new manager of FC Barcelona.

In a statement released on Monday evening, 13 January, the La Liga outfit confirmed that the 61-year-old Spaniard would take over the role until June 2022.

Setien replaces Ernesto Valverde, who – despite leading Barcelona to two La Liga titles during his two-year coaching stint – came under fire for the club’s recent, dismal performances on the pitch.

Said to be one of the most experienced coaches in Spanish footballing history, Setien previously managed the likes of Racing Santander, Lugo, and Las Palmas among others.

Prior to signing his two-year contract with Barcelona, he served as the head coach of fellow La Liga outfit, Real Betis, from 2017 to 2019. He ultimately led them to a 10th-place finish before vacating his position.

With Valverde gone, it is now up to Setien to improve the Spanish club’s performance levels, and to keep them atop of the La Liga standings.