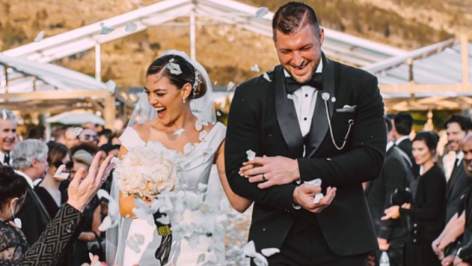 Former Miss Universe, Demi-Leigh Nel-Peters, is officially a married woman, after she and her fiance, US baseball player Tim Tebow, tied the knot this week!

The 24-year-old beauty queen and her 32-year-old beau exchanged their vows in a sunset ceremony – which was attended by 260 guests – on Monday, 20 January, at La Paris Estate in Franschhoek, Western Cape.

For their special day, the couple kept it elegant and traditional, with the bride dressed in a white, custom-made gown, while the groom was outfitted in a black tuxedo.

The reception incorporated both African and American elements, with the menu featuring foods such as steak, pasta and mussels. Tebow even had his very own wedding cake – a cheesecake that was specially made to cater to his keto diet.

Later that evening, Tebow shared a photo of himself and Nel-Peters in their wedding outfits on Instagram. In the caption, he wrote: “Forever.”

Huge congratulations to the new husband and wife!