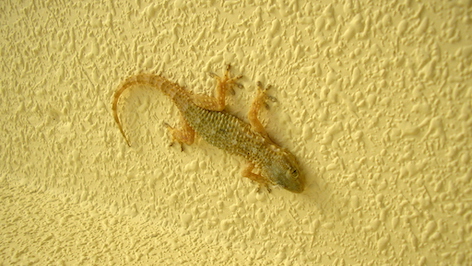 Humans have been forever captivated by how some animals are able to cling to vertical surfaces, especially when upside-down. This ability has inspired a group of scientists to replicate it, and they have produced results.

Researchers from the Georgia Institute of Technology in Atlanta, Georgia, have discovered a way to imitate the tiny hairs that climbing animals – such as lizards – use to overcome gravity.

Dr Michael Varenberg and his team applied polymers onto a smooth surface to improve grip, then set about imprinting climbing pads. He stated that the molding technique is expensive and time-consuming, but transforming the economics of production could mean so much for the technology.

He said: “Gecko-inspired adhesives can lift flat objects like boxes, then turn around and lift curved objects like eggs and vegetables.”

The technology has been used to produce two small robots based on lizards: Geckobot and Waalbot. They’re used for inspection and surveillance duties, however they are ultimately intended to be used on missions in space.

The pads – once properly fine-tuned and mass-produced – could provide a host of applications, such as cleaning unreachable surfaces.