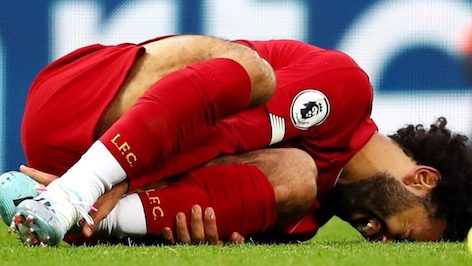 Liverpool are facing a massive injury blow following Mohamed Salah’s withdrawal from Egypt’s squad for their upcoming internationals matches versus Kenya and Comoros due to an ongoing ankle injury he originally suffered in October.

It is now evident that the 27-year-old forward hasn’t healed properly from the injury despite being featured in both Egypt’s and Liverpool’s last few matches, scoring three goals against Genk, Tottenham and Man City.

Salah was pictured wearing a protective boot as he sat out during Egypt’s training session in Cairo before returning to Liverpool for further treatment.

The Reds have decided to allow the Egyptian enough recovery time with an extended international break period. He has also been given permission to train away from Liverpool’s Melwood training ground as he continues his rehabilitation.

However, the team is currently unsure of his return date – with speculations that he could be ruled out for a month – and so he remains in doubt for Liverpool’s next big games against Napoli in the Champions League, and the Merseyside Derby with Everton in the Premier League.