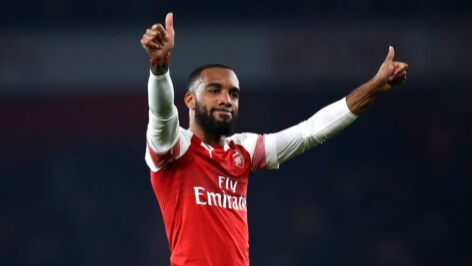 Ahead of their upcoming UEFA Europa League clash with Rennes, Arsenal have received a huge boost after striker Alexandre Lacazette’s three-match ban was reduced to two.

The French international initially received the three-match ban last month, after he was red-carded for swinging an elbow towards Aleksandar Filipovic during the Gunners’ match against BATE Borisov in the first leg of their last 32 tie.

In a statement released on Tuesday, 12 March, UEFA’s Control, Ethics and Disciplinary Body revealed their decision to reduce Lacazette’s ban.

The statement read: “Consequently, the UEFA Control, Ethics and Disciplinary Body’s decision of 21 February 2019 is amended as follows: to suspend the Arsenal FC player Alexandre Lacazette for two (2) UEFA competition matches, for which he would be otherwise eligible for serious rough play.”

With Lacazette now eligible to play, Arsenal will need to beat Rennes on Thursday, 14 March, in order to advance to the Europa League quarter-finals.