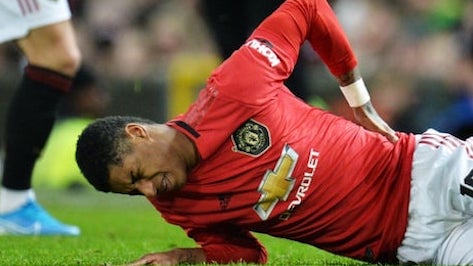 Manchester United manager, Ole Gunnar Solskjær, has confirmed that Marcus Rashford could be sidelined for two months, following a back stress fracture injury he suffered during their FA Cup replay win against Wolves at Old Trafford on Wednesday, 15 January 2020.

Solskjær said: “Marcus suffered a stress fracture against Wolverhampton. I don’t know how long he will be out. We will give him enough time to heal. It’s normally six weeks before you get going slightly, probably, and then he will need time to get match-fit again.”

Rashford is one of Solskjær’s key players and has enjoyed his best form in a United shirt this season. The 22-year-old has scored 19 goals in 31 appearances across all competitions, including 14 in the Premier League – that’s nearly half of the goals The Red Devils scored this season.

With United’s top scorer likely to be sidelined for a longer period, and already without two other key players – Paul Pogba and Scott McTominay – the team is considering signing a few players during the transfer window period, and targets include Sporting Lisbon midfielder, Bruno Fernandes.

Solskjær also hinted that the club might make some short-term deals to find replacements for the injured players.