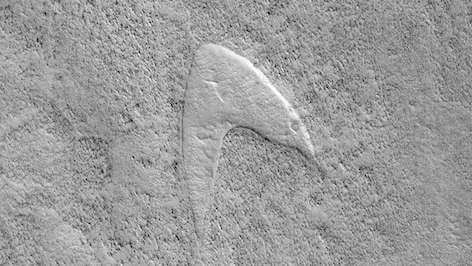 Mars Formation: I’m a Phenomena, Not a Star Trek Logo!

Move over, Face on Mars, there’s a new fascination next door: a picture showing a chevron-shaped formation that looks uncannily like the Starfleet emblem from the science fiction television show “Star Trek”.

The pattern is located in a plain inside a large circular crater in the southern hemisphere of Mars. The shape has no alien origins, nor is it a genius – and expensive – marketing gimmick.

Its formation can be explained by science, thanks to three crucial factors: sand, lava and wind. Planetary scientists estimate that the dunes are the result of ancient volcanic activity on the red planet’s surface eons ago.

The image was taken by the Mars Reconnaissance Orbiter, a spacecraft which has been orbiting Mars for over 14 years.

While this formation was not intentional, it comes as no surprise that Star Trek has influenced the lives of many people involved in several planetary projects, including those involving the fourth planet from our sun; there is a region called “Vulcan Planum”, and you can find craters named after characters from the original series such as Kirk, Spock, Uhura and Sulu.