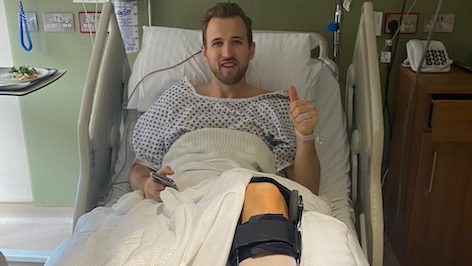 Medical Expert: Kane Could Be Ruled Out for 6 Months

Harry Kane is unlikely to be ready for Euro 2020, according to leading orthopaedic surgeon, Dr Chris Wilson, who has performed the same operation the English captain underwent over 75 times.

Kane suffered a serious hamstring injury during Spurs’ 1-0 defeat to Southampton on New Year’s Day and has successfully gone under the knife to fix the problem.

Tottenham released a statement that their forward is expected to return in 3 months. However, Wilson believes that it could take up to 6 months.

Wilson broke down the recovery time frame as follows: “The first six weeks he will be nursing the repair and doing very little.

Then, 6 to 12 weeks, provided everything goes well, he will be doing basic strengthening exercises. At three months you would start a normal hamstring rehabilitation that you would do if you got a tear in the middle of the muscle.”

He further said that in his experience, it would be impossible for Kane to recover in 3 months, and if he does, he’ll be very surprised.

Wilson advises that caution should be exercised about Kane’s return, even if he feels better, because there is a risk of recurrence.

He said: “Coming back too early increases the risk of re-rupture. There is no getting around that.”