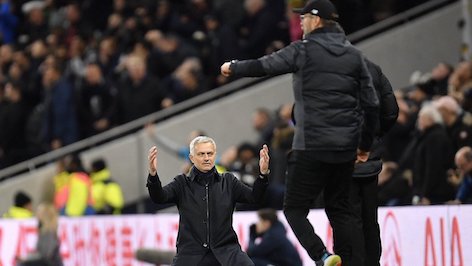 Liverpool’s Premier League record-setting 1-0 win against Tottenham on Saturday, 11 January, saw Jose Mourinho kneeling helplessly in the coaching zone of Tottenham Hotspur Stadium in front of Jurgen Klopp.
Roberto Firmino scored the winning goal in the first half, helping Liverpool secure 61 points from an available 63 this season. No team in the history of Europe’s top five leagues has ever taken more points than Liverpool at this stage of a season.

This remarkable win also captured a hilarious moment between Mourinho “The Special One” and Klopp “The Normal One”.

Mourinho reacted in a rather emotional manner to a lost goal opportunity by Giovani Lo Celso – he went down on his knees in despair – while Klopp was standing in front of him, shouting towards his team.

From a distance, this reaction looked like Mourinho was bowing before Klopp – something he would never do. The images of this scene caught on camera went viral on social media with the caption: “The Special one kneels in awe of the Normal one”.

Mourinho further sealed the funny bow gesture by praising Liverpool during his post-match interview. He said: “I think we tried everything. We are speaking about the best team in the world at the maximum of its potential”.