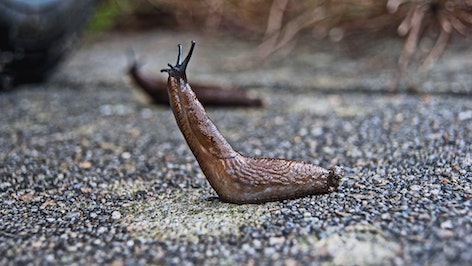 Scientists have uncovered an adhesive superglue that they claim can stick a fully-grown human to a ceiling with just a coin-sized amount! The impressive part is that its reversible: it can be switched on or off at will.

Researchers at the University of Pennsylvania looked to the natural world for inspiration to find a substance that was both a super strong, but reversible adhesive.

Slugs and snails are capable of sticking to surfaces due to the slimy mucus they produce. When wet, their mucus allows them to move at just the right pace; when hardened, can remain stuck to a surface for long periods.

Inspired by the mollusc mucus, the research team developed a hydrogel made of a polymer called polyhydroxyethylmethacrylate (PHEMA), which is rubbery when wet but rigid when dry – its reversibility is controlled by water.

Shu Yang, lead scientist and a professor in the Department of Chemical and Biomolecular Engineering, said: “When materials dry, they usually shrink. If it shrinks from the surface, it no longer wants to conform to the microcavities and it’ll pop out. Our PHEMA adhesive doesn’t pop out. It stays conformal. It remembers the shape even when it’s dry and rigid.”