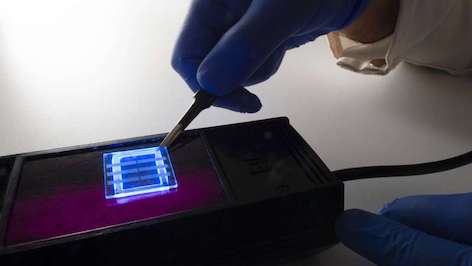 A team of researchers from the Queensland University of Technology (QUT) have developed a method of transforming human hair into something truly remarkable, and the local barbershop is smiling instead of splitting hairs.

The Australian scientists have turned the leftover bits of hair into flexible displays which can be used in future smart devices, including wrist devices and packaging.

How, you ask? The team “broke down” the discarded hairs before burning them in 240 Celsius heat. The high temperature further breaks down the hair – which is made of proteins, such as keratin, and produces materials that are conducive to emitting light particles.

When grouped together, they become a basic organic light-emitting diode device, which lights up when a small voltage is applied – not strong enough to be used in a large appliance like a television, but just enough to have a host of other uses.

Prashant Sonar, associate professor and chief investigator at the QUT Centre for Materials Science, claims that the method could be used for smart packaging and sensors in water treatment systems.

Sonar alluded that if it works with human hair, then perhaps animal hair could also be used, such as using wool from sheep or hair from dog-grooming salons.