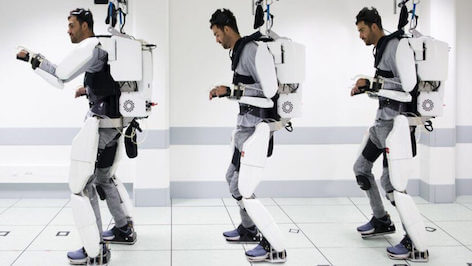 A paralysed man named Thibault is now able to walk with the aid of an exoskeleton that he controls with his mind.

Although he can’t take a leisurely stroll on his own – the suit is suspended from a ceiling-mounted harness – the technology is a major step in the right direction.

The suit works via implanted brain sensors which allows the Frenchman – who fell 15 metres and broke his neck four years ago, paralysing him – to move the arms and hands of the robotic exoskeleton with just his thoughts.

Thibault said: “I felt like the first man on the moon. I hadn’t walked for two years. I had forgotten that I used to be taller than a lot of people in the room. It was very impressive.”

The technology holds much promise for those who have suffered spinal cord injuries. The only hurdles include invasive electrodes that must be connected through the skull and directly to the brain.

Other issues include removing the harness and auto-balancing on the suit itself, and to make it more mobile, easier to transport and user-friendly.