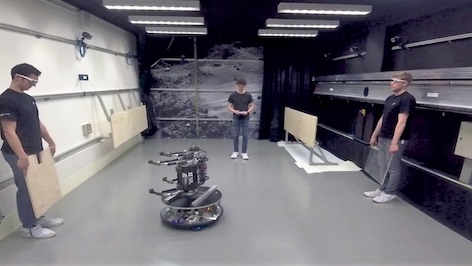 Robot Takes Ping Pong to the Next (Outer Space) Level

Scientists have developed a robot that will hop across difficult and uneven terrain on other planets. To test its abilities, they played a live-action game of ping pong with it.

Researchers from the European Space Agency (ESA) have been perfecting the technology behind the deer-like robot – called “SpaceBok” – at the agency’s robotic facilities in the Netherlands.

Scientists placed the robot sideways on a free-roaming platform to simulate a zero-gravity environment, and then proceeded to bounce it between platforms.

SpaceBok is able to stabilise itself with a built-in reaction wheel, allowing it to swivel 180 degrees mid-jump to position and push itself accordingly.

The team claim that the robot can jump up to two metres high in lunar gravity.

Hendrik Kolvenbach, a PhD student from the ETH Zurich university and the head of the team, said: “The ping pong game was a nice way to demonstrate the capability of [SpaceBok] to control its altitude and position its feet for landing in an extremely low-gravity environment.”