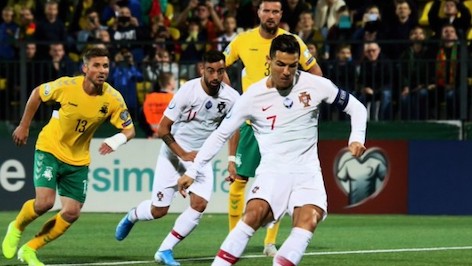 Cristiano Ronaldo has once again proved that he’s still one of the best goal scorers in the world.
The Portuguese international netted four goals for his country in their Euro 2020 qualifier’s 5-1 win against Lithuania.

The Portugal captain made his 160th international appearance on Tuesday, 10 September and produced yet another record-breaking performance — securing his country second position in Group B of the Euro 2020 qualifiers.

The five-time Ballon d’Or winner broke the all-time European qualifying goalscoring record which was previously held by Ireland legend, Robbie Keane. During the match build-up, Keane took Instagram to jokingly ask Ronaldo not to break his record. He wrote: “I think you have enough records @cristiano… Leave this one” alongside a crying with laughter emoji.

But Juventus superstar Ronaldo showed no mercy to Keane, with a ruthless display against Lithuania. His performance also marked his 54th hat-trick for the club and country.

Portugal coach, Fernando Santos, praised him during his post-match interview saying: “This is the clear and irrevocable proof that he is the best player in the world”.