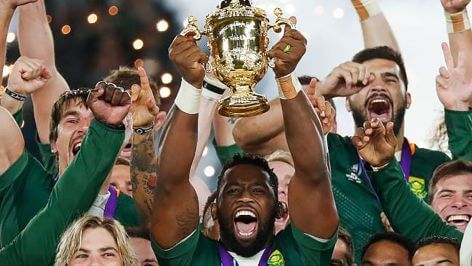 Politician Mbuyiseni Ndlozi – as well as singer-poet, Ntsiki Mazwai – have both come under fire for their negative comments after South Africa won the 2019 Rugby World Cup final in Tokyo, Japan.

Led by captain Siya Kolisi, the Springboks defeated England 32-12 on Saturday, 2 November, to win the tournament.

In the midst of their euphoric celebrations, however, fans were caught off-guard by a tweet posted by Ndlozi that same day.

In the tweet, the politician praised Kolisi, but said the rest of the team must “get their congratulations from Prince Harry”, who had visited the Springboks’ changing room to congratulate them.

Similarly, Mazwai posted a video on Twitter to air her grievances with the team. She is heard proclaiming that she “will not be a fool and pretend that the team that is representing South Africa, represent me and represent the demographic in my country.”

Needless to say, fans blasted the pair for their negativity, with one fan writing: “Although there is some truth in statements made by Ntsiki & [sic] Ndlozi, but every small step made by Africans should be celebrated & [sic] applauded.”