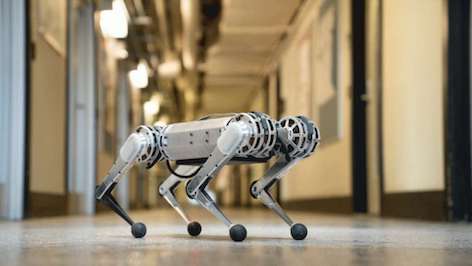 The nimble and light Cheetah 3 is a wonder of robotic design – and fun to watch when you have nine miniature versions of them playing football together.

The Massachusetts Institute of Technology (MIT) uploaded a video to YouTube last Wednesday, 6 November, showing a small team of the Mini Cheetahs – a smaller and lighter version of MIT’s famous robot – prancing in place, forming a military line, doing backflips and even “playing” football.

Each Mini Cheetah weighs less than 9 kilograms and is “virtually indestructible” according to the MIT engineers, and its parts are easily repairable and replaceable. It is capable of trotting over most uneven terrain at an average speed of 8 kilometres per hour – twice the walking speed of the average human.

The agile little robot was unveiled in March of this year, and MIT developers created the 10 Mini Cheetahs, which they intend to loan out to other institutions for scientific experiments.