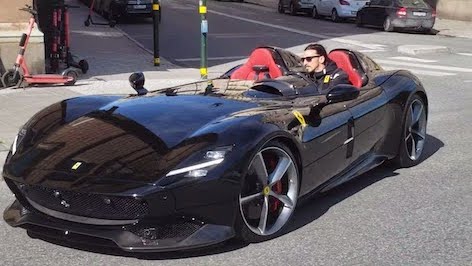 AC Milan striker, Zlatan Ibrahimovic, is facing a stiff fine after being caught taking his Ferrari Monza SP2 for a drive around the streets of Stockholm, Sweden.

The 38-year-old footballer – known for driving expensive cars – was not speeding, nor breaking lockdown guidelines, but he neglected to register his rare car with the Swedish Transport Agency.

According to the agency officials, Ibrahimovic’s convertible sports car has been out of registry for more than a month, and he is only permitted to drive it to the inspection centre to register it.

The vehicle in question is one of the most powerful naturally-aspirated V12 engine Ferrari has ever built for a road car – roofless, no side windows and even no windscreen. There are only 499 in the world, and each one is worth almost €2 million.

Ibrahimovic was expected to return to Italy for training, but those plans may be delayed until Swedish authorities have decided on a punishment for him.